Your browser does not have JavaScript enabled.
Please turn scripting on in your browser settings.
Intern Blog | Page 67 | Henry's Fork Foundation
Skip to main content

The days here at the Henry’s Fork Foundation have been rolling by. The weeks seem to be flying by and I have only been working for four weeks. I continue to collect water samples every Tuesday which always proves to be a long day. Even though the days may be long it is all worth it because of the breath taking views that I get to experience. Each site we take samples from is extremely beautiful, but I think that the site at Flatrock in Island Park is the best one of all. The water is very clear and you can see all the way up river. With the recent wildfires in the region the views can sometimes be a little smoky, but usually it isn’t that big of a deal and it is still beautiful. 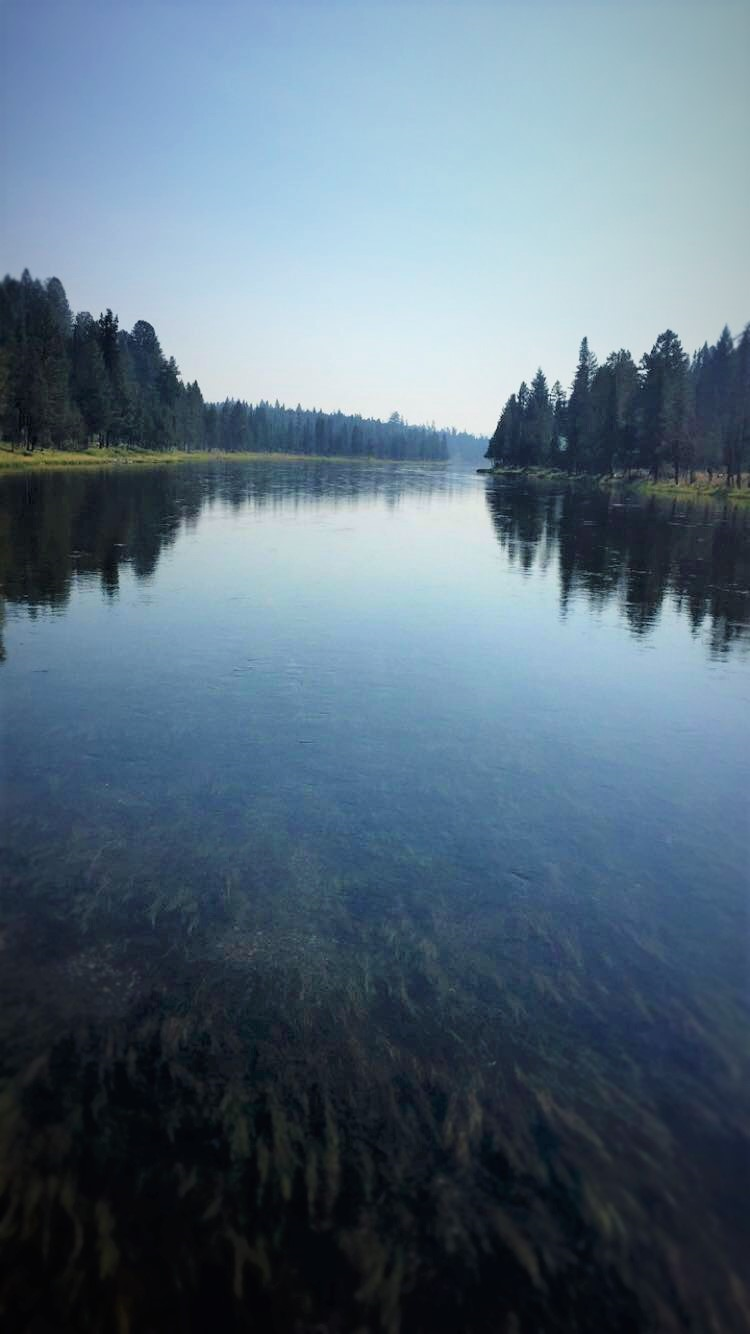 Along with collecting these water samples, I also have the responsibility to monitor the fence line along the river near Pinehaven in Island Park. Although there aren’t any cattle in that area until September, there are still areas where anglers have let down the fence and I have to put it back to how it was. The Foundation also gets several calls about cattle getting into the river near Last Chance and the Box Canyon and it is my responsibility to push them out of the river and back to where they are supposed to be. This last Thursday on August the 18th we received a call about cows getting into the river just below the Box Canyon. I drove up there and found where they were and I also found that I had to cross the Box Canyon. Anyone who has ever fished the Box Canyon knows that wading in the river is very difficult due to the many large rocks in the river. I found my way to the water’s edge and began wading toward the cows and after almost going swimming on accident more than a few times I finally made it across with only hitting my shin on a rock once. I now was yelling at the cows blaming them for my bruised shin bone and it must have worked because they got up and out of the river and headed back into the trees. I now realize that I will be doing this more than I had thought I would at the first of my internship. I also learned that I better get used to dodging the many rocks of the Box Canyon. 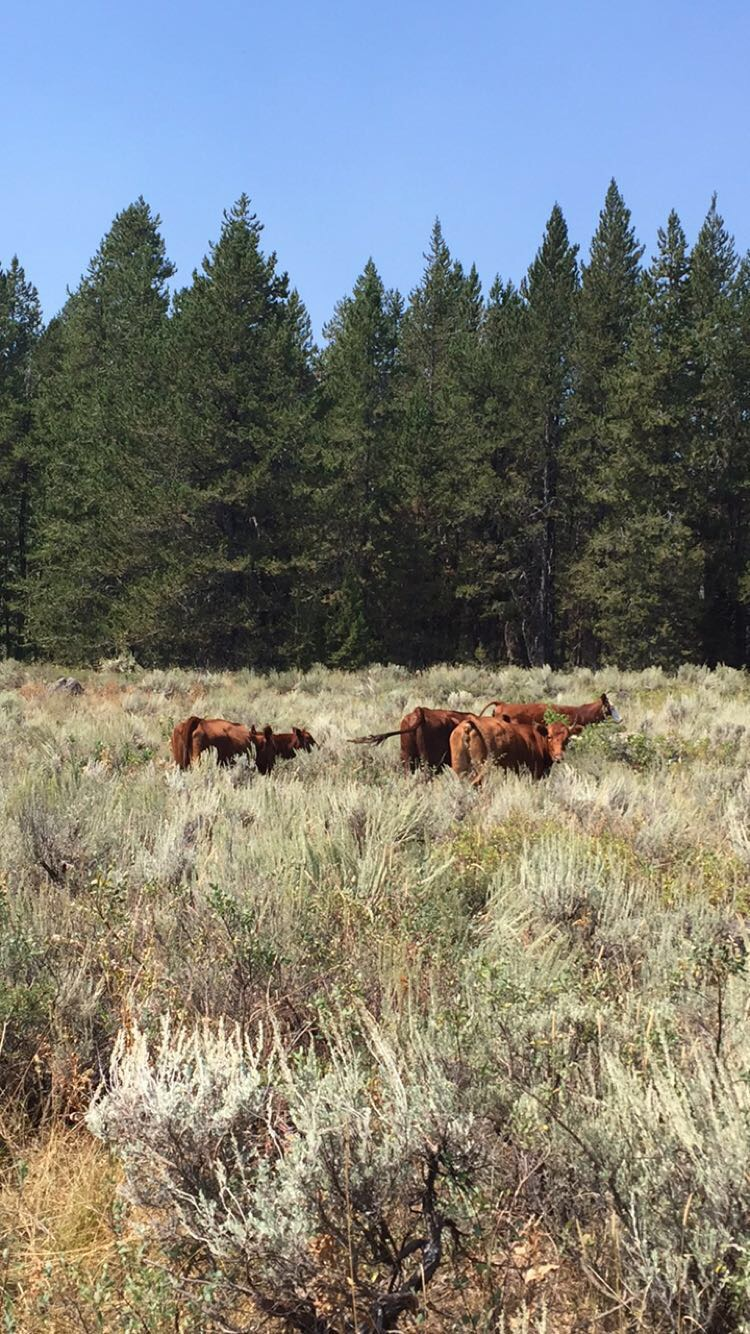 (Cows near the Box Canyon)

Along with the weekly duty of fencing I am also still conducting creel surveys along the Teton River. Although I have spent several hours near the river, I have only conducted very few surveys. It seems as if the Teton River is used more for recreation activities such as tubing or kayaking instead of fishing. I can’t complain about this because if there isn’t anyone to survey then I can just fish by myself. Recently hoppers have been working very well on the Teton and it has gotten me into a few nice cutthroats, but I have yet to catch anything above 15 inches. I’ve had many people ask me about the black spot disease and I have only found it in the Teton.  The disease is actually a parasite that has burrowed into the skin of the fish. After the parasite has burrowed it then forms a black cyst that is found in the fish. Although the spots may look harmful there is actually little damage to the fish. If the spots get onto the eyes of the fish then the fish could be blinded, but that doesn’t happen very often. The worst thing the disease does is it affects the aesthetic qualities of the fish. Instead of a beautifully colored cutthroat, you could have a cutthroat with hundreds of little black spots all over. The fish may not be the best to look at but they are still really fun to catch! I encourage everyone to get out and fish the Teton so that maybe I can ask you a few questions. 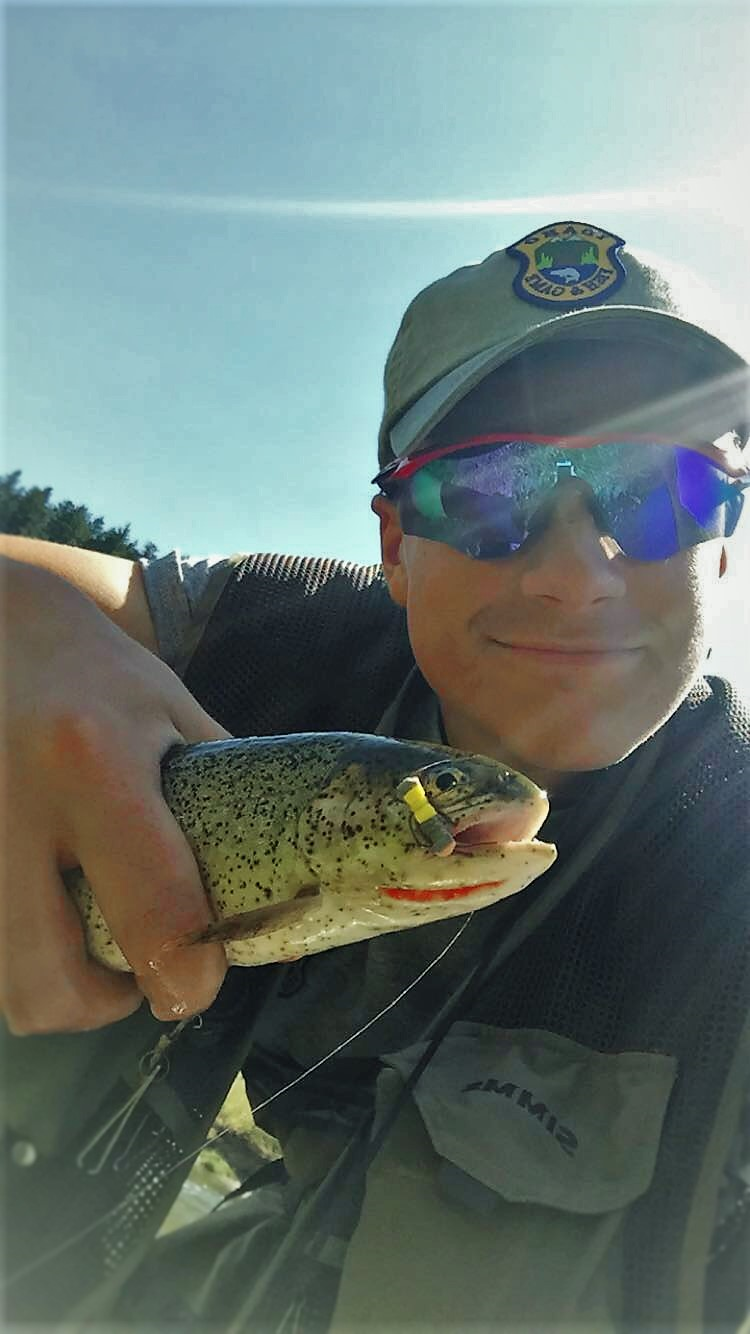 (Me with a Cutthroat that has the Black Spot Disease)

Unfortunately feeding the two fish at the High School has changed into feeding the “one” fish. During a power outage over the weekend, not enough oxygen was in the water for the rainbow trout to survive due to the aerator that didn’t work. The cutthroat however survived and is doing very well and I continue to feed it every day. The tank has seemed a little dirty lately so in the near future that will be something else that I will need to do. School is now in session at North Fremont High School which gives me the opportunity to see some of my old friends on occasion walking in the halls as I go to feed the fish. I also went to Rexburg so that I could purchase some more fish food for the lonely cutthroat. Hopefully there won’t be any more power outages or any other problems so that the cutthroat can live a long healthy life.